Central California has a spectacular array of wildlife and open spaces. We've become famous around here for our wines (i.e. Sideways) and our beaches. Generally, it's been the southern half of Santa Barbara county that's gotten the most hype, and the beaches here are standard SoCal fare: mowed, flat, with a long expanse of soft sand leading into the surf. But if you head up north for an hour (and brave a treacherous, windy stretch of the 101), you'll be rewarded by the sight of sandy dunes rising slowly above the earth, sprinkled with lupin bushes and wildflowers. In short, you get to see California beaches in their natural state.

This summer, I'm lucky enough to be working on a seabird monitoring program with PRBO Conservation Science. My supervisors, Dan R. and Julie H. (last names omitted for privacy), have considerable expertise surveying and managing marine wildlife at Vandenberg Air Force base. Vandenberg occupies a stretch of land that runs alongside the Pacific Ocean, so you have surf, turf, and rockets all in one space (take that Top Chef! Surf and turf challenges have nothing on this!).

One of my responsibilities is conducting foraging surveys where I sit at an observation point (OP) for 3 hours and scan the ocean in 15-minute intervals, identifying all animals that are diving into the water. I'm surveying three sites this summer, and each site has its own unique micro-habitat. Purisima Point is one of the three sites, and it takes a 30-minute hike alongside a Least Tern nesting colony to get to the OP. Usually I'm sweating and meandering my way toward the OP, trudging through sand and getting blown off course by windy gusts. 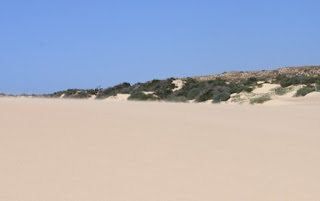 The photo above is the last portion of my hike to the OP, and if you look closely at the sand dune in front of the background dunes (which are covered in vegetation), you see that the sand is actually being blown down the dune (which makes the border of the foreground dune somewhat blurry). This is a dynamic ecosystem that changes from week to week.

But the views along the way more than compensate for the slow sand trudge. At the least tern colony, Dan, Lynne (another intern), and I checked their nests which are shallow indentations in the sand (called scrapes). Many of the eggs have hatched into chicks, and as we approached the colony, adult terns began to attack us--ostensibly, they perceived us as predators out to gorge on their chicks. 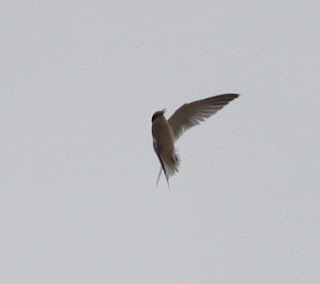 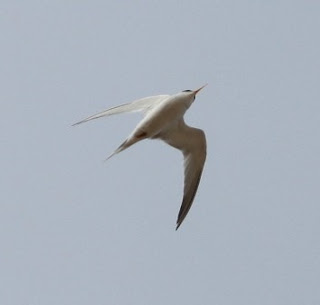 Past the colony is my OP (observation point) where I conduct the foraging survey. I sit in a folding lawn chair, and use a 20-60X spotting scope and my binoculars. The OP sits up on the cusp of an iceplant-covered dune overlooking a cormorant roost. 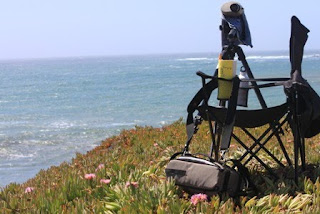 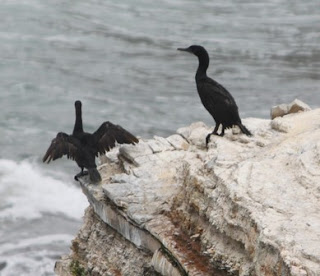 There were also two Pelagic cormorant nests within view: 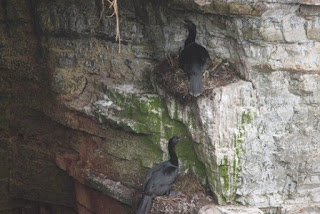 There is also a pigeon guillemot colony located nearby, and two guillemots were copulating on a rocky outcropping. 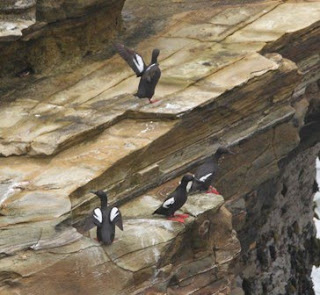 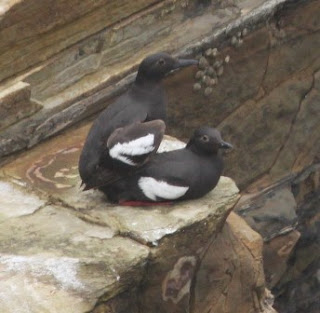 During the foraging survey, I saw cormorants and guillemots diving into the water (and occasionally emerging with fish), but this week, there was a special guest appearance of a Pacific harbor seal slowly bobbing through the water close to the OP. 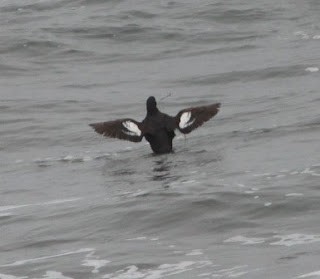 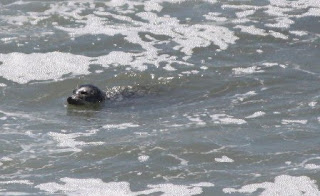 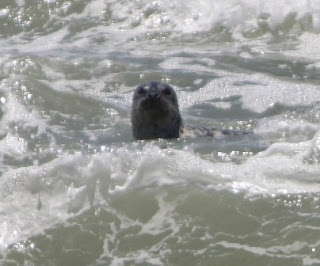 Posted by Charlotte at 3:02 PM

Charlotte
When I was younger, I wanted to learn how to fly. I figured that taping trash bags to your arms wasn't cheating. The thing is, free fall is quite different from free flight, so now I watch birds from the ground. I also whistle when I walk, attempt to cook and garden, and try to nap as often as possible.