There are two other sites that I cover at Vandenberg. The first is called Lompoc Landing, and assuming that I got this correctly, it's a new site. The other one is called either Pocket's Cove or Cabrillo Beach, and I manage to jumble the names continuously. Both of these sites are much more accessible than Purisima Point (recall: 30 minute slow, sinking walk through the sand)---in fact, I get to park my car right next to my observation point (OP) for Lompoc Landing.

Vandenberg's coastline gradually grades from hard bottom to soft bottom shores, meaning that it transitions from zones where the substrate is rocky, and, well, hard, to areas where the seafloor is just the loosest assemblage of fine sediment. My sites mostly encompass hard bottom shore, also known as "live bottom" because a hard seafloor in the benthic zone (areas that are shallow and near-shore) supports kelp forests which provide the nutritive base for marine life.

Lompoc Landing has perhaps the rockiest outcroppings of my three sites, and the largest raft (i.e. group) of pigeon guillemots. Pigeon guillemots tend to float on the water with occasional spurts of showboat-y preening displays where they tuck their upper bodies into the water, and roll drops of water between their flailing wings. It's cute, and even endearing up to a point, but guillemots have the annoying habit of diving infrequently (at least to my inexperienced eye) so that I'll try to telepathically encourage a particular guillemot to dive. After all, I may see thirty-some guillemots on the water, but if none of them dive, then I've effectively gotten skunked on a survey round.

So this photo below was a kind of bittersweet semi-victory. I didn't see this fellow dive, but it was close to the guillemot colony and had a fish in its bill. It rafted along the surface for a bit, but didn't get around to eating the fish. Ostensibly a chick or a mate was going to benefit from an offering of plump, shiny fish. 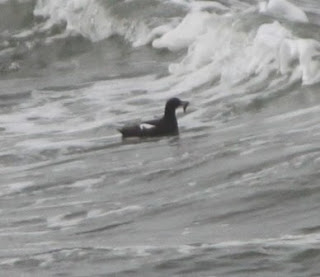 A large group of cliff swallows has a roost near the Lompoc Landing OP. The OP itself is situated atop a fairly steep cliff-face, so it is fitting that it is graced with the acrobatic flight of so many swallows (cliff, and, I suspect, Northern rough-winged). The cliff swallow below is flying above a dirt two-track completely surrounded by ice plant (pernicious, nasty stuff, that). 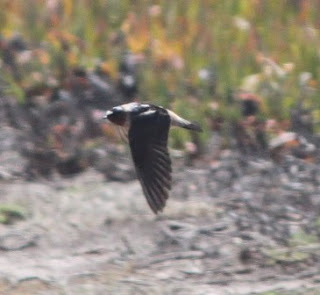 At all three of my sites, the coastline morphs from hilly sand dunes to grass- and shrublands. Interestingly enough, the path to Lompoc Landing is bisected by Amtrak train tracks which seem to magically demarcate the border between dry upland and marine coast. Just past the tracks golden eagles, red-tailed hawks, and turkey vultures idly wheel through the sky. I'm guessing that this was a juvenile golden eagle perched on a telephone pole next to the train tracks based on the white patches visible on its tail when it was flying. I'm not at all sure about it though, so please correct me if I'm wrong. In any event, it's exciting to see a golden eagle---juvenile or otherwise---in Central California. 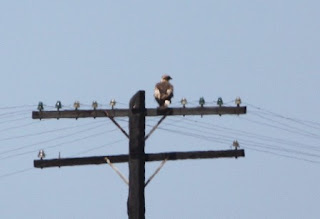 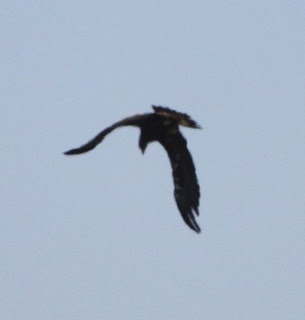 Red-tailed hawks are much more common, to the point where even I could recognize them despite my complete incompetence with raptor identification. I was able to get a shot of an adult with its beautiful, salmony-red tail. 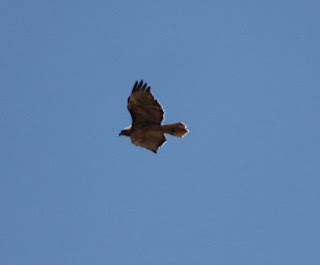 Cabrillo Beach is my third site, and geographically, it is sandwiched between Lompoc Landing to the north and Purisima Point to the south. The other moniker for Cabrillo Beach (in addition to Pockets Cove) is Seal Beach, since there is a rocky outcropping that California harbor seals seem to favor as a haul-out point. Lately there haven't been too many harbor seals, but the abundant kelp beds at this site guarantee ample numbers of California sea otters. Like guillemots, otters will generally loaf about in the water, and don't seem to spend much of their time foraging, particularly later in the day. They'll float on their backs, carelessly trying to pry open mollusks on their chests, or devouring fish while ecstatically squirming through the water. But once in a while, a lone otter or two will break away from the larger group and forage. Here's an otter swimming close to shore, stopping to gaze curiously off into the horizon. Sea otters tend to be pretty hyperactive, so one way to distinguish an otter from a seal is its speedy, quick, constant motion. 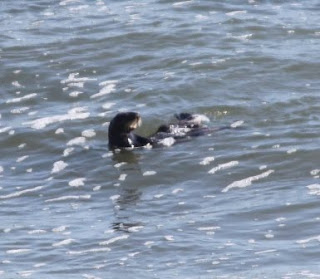 True to its nature, the otter covered a lot of ground, continuously surfacing and then diving into the water. I managed to get a shot of its back as it dove into the water---you can see its vertebrae protruding below. 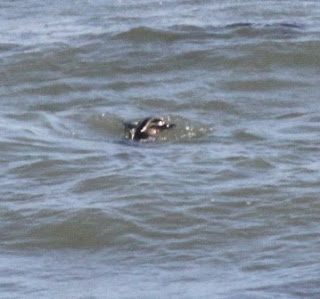 This otter was eventually victorious and got to eat a fish. Below, you can see its snout open wide. 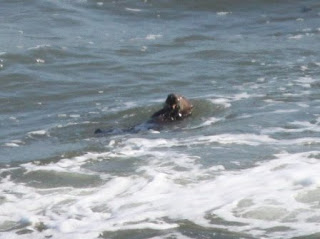 And no discussion about marine life foraging at Vandenberg is complete without mentioning cormorants. I conduct surveys in three hour blocs (0600 - 0900, 0900-1200, 1200-1500, 1500-1800), and I do a maximum of two surveys a day, separated by a break of three hours. That day, I was doing a 1500 - 1800 survey at Cabrillo Beach, and though the weather was great, the conditions were far from optimal. Around 1700, there was substantial glare on the water, and for the most part, the marine predators avoided areas with high glare (probably because of low visibility). 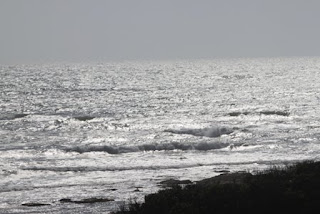 As a whole, there generally isn't too much going on in that time span. The birds and mammals are most active at 0600, and foraging activity peters down as the day advances. I suppose that the key exception is the immediate approach of dusk, when mass amounts of Brown Pelicans will dive bomb the ocean from the air. Thankfully, even when most birds (i.e. alcids like the common murre and the pigeon guillemot) take a break, cormorants still deliver. Below is a picture of a cormorant barreling out of the water. 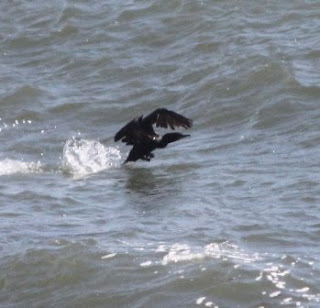 Posted by Charlotte at 1:37 AM

Charlotte
When I was younger, I wanted to learn how to fly. I figured that taping trash bags to your arms wasn't cheating. The thing is, free fall is quite different from free flight, so now I watch birds from the ground. I also whistle when I walk, attempt to cook and garden, and try to nap as often as possible.